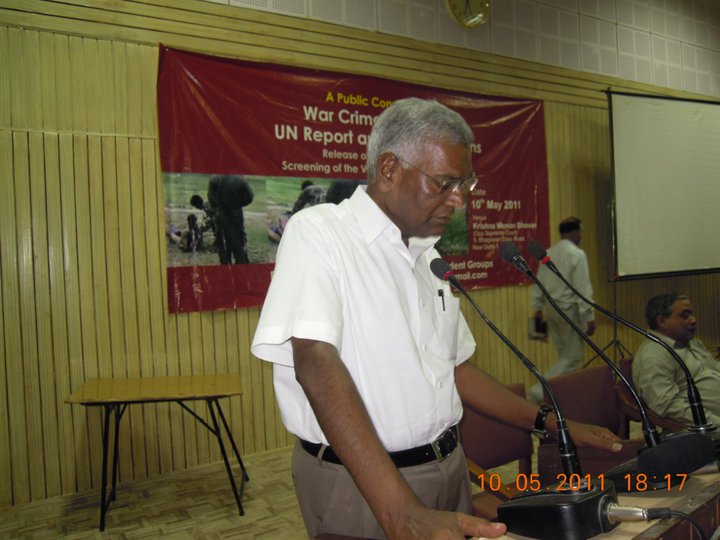 A Convention titled ‘War Crimes in Sri Lanka: The UN Report and its Implications’ was organized yesterday, May 10th 2011, by the Delhi Tamil Students Union (DTSU) and other student groups at Krishna Menon Bhavan New Delhi to discuss the significance of the UN Report, why it needs to be popularized and how the Indian public and political parties should respond to it. The convention was divided into two sessions, the first comprised of leading human rights activists. Politicians from various national parties of India spoke at the second session. A condensed version of the UN report published by DTSU, with a foreword by Justice Rajinder Sachar, was released at the convention by Sachar himself.

The first session was chaired by Prof. Jagmohan Singh, former editor of World Sikh News and prominent campaigner against death penalty.  He said that considering the atmosphere of silence surrounding the Sri Lankan conflict in India, the report gives us an opportunity to discuss, to debate, to analyze and also to force the UN to rethink its own working and strategy. Even after the release of the UN Report, countries that backed Sri Lanka’s genocide of the Tamils “suffered from a conspiracy of silence or they go into a perpetual denial mode”, he lamented. Referring to the role of India in Sri Lanka, he said that the Indian government cannot escape responsibility for the crimes of the Lankan government. He also pointed out how the gifting of Katchatheevu by India to Sri Lanka resulted in the deaths of hundreds of Tamil fishermen, who were shot by the Sri Lankan navy, noting India’s callousness towards genuine Tamil issues. “This war was a war against Tamil people per se” said Prof. Singh, but “Tamil Nadu politicians did not play the role they could have.” He contended that the Tamil Nadu assembly should pass a resolution that an enquiry into genocide of the Tamils in Sri Lanka should happen. “Tamils may have lost the battle, but they will definitely win the war,” he concluded.

Prof. Manivannan from the University of Madras pointed out that as far as war crimes are concerned how almost all media houses in Sri Lanka and those in India like The Hindu just replicated official versions of the Lankan state. He noted how the Sri Lankan army also used other methods to intimidate the Tamils, like deliberate starvation of the Tamil population and systematic sexual assault of captured Tamil women, all which could fit in the paradigms of genocide. “If this goes unaccounted and unpunished in human history, the word justice will lose its meaning,” he said.

Satya Sivaraman, independent journalist and activist, noted how Sri Lanka changed from a model country for South Asia in the early 50’s to a model that emulates Rwanda now. Calling what happened in Sri Lanka as a “classic war crime”, he pointed out the pernicious role played by some politicians and bureaucrats in the Indian government. “Besides logistical support to Sri Lanka, the Indian government worked as a public relations manager for Rajapaksa’s regime,” he said. He talked about the need for the Eelam Tamils’ issue to be taken beyond Tamil Nadu and for mobilizing public opinion against war crimes in Sri Lanka.

Justice Rajinder Sachar, former Chief Justice of High Court of Delhi, talked about the necessity of taking the report seriously. “Mention any crime, you will find out that it was committed by the Sri Lankan army.” He said that the government of Sri Lanka should be held accountable for its crimes and blasted the President of Sri Lanka for restricting the access of UN panel members to investigate human rights violations in the country. He also lamented the partisan nature of the legal system in Sri Lanka. “India should not remain silent about the barbarism in Sri Lanka. It is not an option,” he said.

Malem Ningthouja of Campaign for Peace and Democracy in Manipur and Nagari Babiah, a Karnataka based human rights activist, also expressed their solidarity with the Tamils’ demand for justice. Malem spoke for the need for the issues of such oppressed communities to be internationalized and for solidarity for such movements to be built at a broader level.

The second session was chaired by Satya Sivaraman. Videos showing the brutalities of the Sri Lankan army on the Tamils, including shelling of hospitals, civilian zones and humiliation and execution of captured prisoners was screened.

D. Raja, from the Communist Party of India, who spoke in great detail about the atrocities on Tamils in Sri Lanka that has been happening over a long period of time, pointed out how the ruling class of Sri Lanka had always been opposed to the Tamils and how this took a more virulent turn after Rajapaksa took over. In the context of the UN report it was necessary for India to take responsibility now, he argued. “Even though the war was waged by the Sri Lankan government, India was a collaborator,” he said. He asked how the UPA government could help Sri Lanka in this genocide of Tamils, besides criticizing India’s previous attempts to prevent war crimes investigations by the UNHRC. “This UN report deserves a response from India and the international community,” he said, Adding that “Government of India’s foreign policy towards Sri Lanka has completely failed now,” he demanded an explanation from the Government of India as regards the UN report.

Ram Vilas Paswan, National President of Lok Janashakti Party (LJP), remarked that as early as 1982 they had stated in the parliament Sri Lanka is heading towards chaos. He pointed how Sri Lanka’s desire to impose a monolithic polity through one language and one culture and denial of any autonomy whatsoever to the Tamils led to the current scenario. He said that while there was considerable debate in the Indian media about issues of Bangladesh, Palestine or Afghanistan, when it came to Sri Lanka it was all reduced to the issue of Tamil ‘terrorism’. “There has been an attempt to hide from the non-Tamils in India the problems of Tamils in Sri Lanka,” he said. Paswan said that the heart-rending videos shown proved that what was happening in Sri Lanka was a genocide. “Indian government cannot have one policy for Bangladesh and another one for Sri Lanka,” he remarked. Telling that the Tamils’ issue needed to be taken throughout India, he said that 90% of the Indian population stood for justice and against fascism. Remarking that “The Indian government cannot be silent. If there is an assault on humanity, whether on Tamils or on anyone else, the government should speak up,” Paswan promised that LJP would ensure that the Tamils’ issue will be raised in the Indian parliament. “One signal from the Indian government that we will not stand with the atrocities is enough for Sri Lanka,” he said.

Swapan Mukherjee of the CPI(ML)Liberation also extended his party’s solidarity with the attempts to popularize the UN report and to generate a movement in India to pressurize the government to come clear on its position on Sri Lanka. The Indian people must actively pressurize the Indian government and the TN assembly to pass resolutions against the Sri Lankan government, he said. “The Rajapakse government must be taken to task. This is for the future of democracy, secularism, peace and prosperity in South Asia,” he said, affirming his party’s commitment to take the campaign forward.

The convention put forth five resolutions which were passed with unanimous approval by the house. They are as follows

1) That the United Nations should follow up the advisory committee’s report with appropriate action.2) That those responsible for the international crimes against the Tamil people, that is, the political and military command of Sri Lanka, be referred to the Prosecutor of the International Criminal Court.3) That the war crimes and crimes against humanity, as stated in the UN Report on Sri Lanka, be recognized as genocide considering the nature and extent of atrocities against the Tamils.4) That the Indian government come out with a white paper on its involvement in Sri Lanka after the breakdown of the peace process and support the due process of international investigation in order to secure peace, dignity and justice for the Tamils.5) The house also appeals to political parties and all democratic forces in the country to express their serious concerns to raise the issue of war crimes in Sri Lanka.