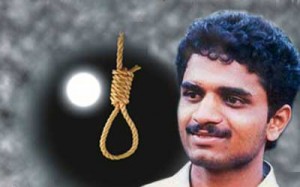 A plea from death row

Every time when I fail in my fight for truth, I regain my confidence by remembering those words of William Penn. I have a special sense of pride on being on the side of truth.

How shall I introduce myself? As the only son of a poor school teacher who instilled ethics in hundreds of students? Or as the son of a mother who taught me that morality and humanism are the two eyes of life? I don’t know. Though I would like to introduce myself like this, I have already been introduced in a way that I did not like. That is: A.G. Perarivalan, a death convict in Rajiv Gandhi murder case. Yes, it is my identity, I cannot avoid it.

It was a great tragedy that a man roaming on the streets 20 years ago was suddenly portrayed as a terrorist and murderer. I have never imagined that empathising with fellow human beings’ sufferings and joining the effort to wipe their tears would be considered murderous. I have never been involved in killing anyone, let alone Rajiv Gandhi. I have never harboured such a thought. My love for Thanthai Periyar’s thoughts and anti-Brahminism were the first weapon for the oppressing forces to portray me as a murderer; my never ending interest in our Eelam Tamils’ struggle was the second.

At the age of 19, I was tortured by investigative agencies and was portrayed as a bomb-making specialist by the media just because I had a diploma in electronics and communication. But K. Rahottaman, the chief investigation officer in the Rajiv case, who retired in 2005 as DSP, said they had no evidence.

The ‘killer’ image painted on me is slowly fading now. When the investigation report by the multidisciplinary monitoring committee (MDMA) that was constituted by orders of Jain Commission comes out, many truths will come to light. With the help of TADA, an Act which is against human rights, a terrifying story was foisted upon innocents like me.

If the death penalty can be given to a man for buying two ordinary 9 volt battery cells, if 20 years of his youth can be robbed, I sincerely doubt there is justice in the world. The Tamil book I wrote about the hidden truths in my case, An Appeal from Death Row, has been published in six editions and sold 11,700 copies. The letters written by retired SC Justice and human rights activist V.R.Krishna Iyer to the PM, Sonia Gandhi and the CM of Tamil Nadu were victories after a long and painful struggle.

The letter by retired Justice H Suresh of Mumbai High court, the letter by a member of the Assembly from my native place, and the support being given by my school teacher, village people soothed my broken heart. I want to ask those who love Rajiv Gandhi and those who criticise him, do you really want an innocent man to be hanged? I hope people like you who are humane and follow the path of justice will not agree. Please lend your ears to the voice of truth raised by a man who has no political influence and money power. If the truth I told you touch the bottom of your heart, let your strong voices be raised for my freedom. Let justice prevail.