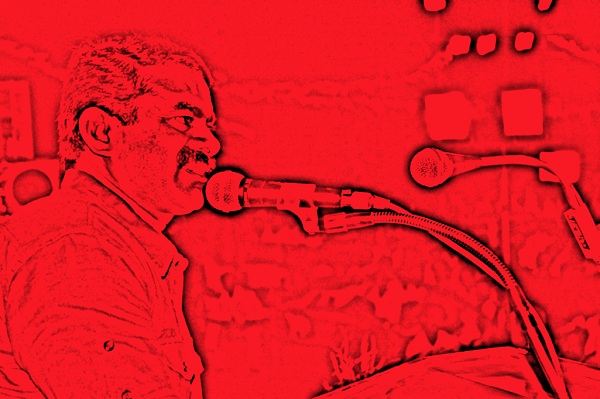 It was almost noon and the sun was blazing. But that did little to affect the crowd from growing steadily to listen to the impassioned speech of a man in black shirt and trousers.

It is no exaggeration to say that the actor-director-turned-politician Seeman’s election meeting at Alandur market here on Monday set the town on fire.

The articulate politician’s use of chaste Tamil, interspersed with satire and pathos, no doubt struck a chord with the audience. Interestingly, he made a scathing attack on the Congress and the DMK, even while being absolutely respectful. No wonder, Seeman’s blazing words held his audience transfixed, some standing by and listening while still holding their shopping baskets.

Throughout his trailblazing speech against the Congress, Seeman maintained a thread of logic, something that only a few other speakers are capable of. For instance, he wondered why the “so-called grand old party” kept parroting that only cordial ties between the Centre and the State brought several schemes to Tamil Nadu.

“This is the height of autocratic attitude. Damn this. Does the Congress mean to say that Karnataka that is ruled by the BJP and Kerala which is run by the Left front would not be given Central assistance?” he asked.

It would do no good to participatory democracy if a single party like the Congress controlled the whole country, he pointed out. Holding the Congress squarely responsible for the genocide of innocent Tamils in Sri Lanka in 2009, he said no self-respecting Tamil would ever vote for that party. “In Alandur, please vote for Panruti Ramachandran of the DMDK. He understands the pain of the Tamils, their problems and needs,” he said.

Hitting out at DMK patriarch Karunanidhi for his comment that fishermen were being allegedly killed by the Lankan Navy only because of their greed, he said the fishing folk crossed boundaries only to earn a morsel of food despite the risk of facing Lankan bullets. “Perhaps, he might have thought that they are going to the middle of the seas to find 1,76,000…” he said, leaving his sentence incomplete and allowing the ensuing silence to be filled with thunderous applause from his audience.