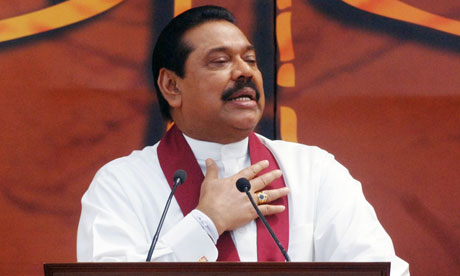 American diplomats believed that the Sri Lankan president, Mahinda Rajapaksa, bore responsibility for a massacre last year that is the subject of a UN war crimes inquiry, according to a leaked US cable.

Lawyers for Tamil activists in Britain are seeking an arrest warrant against President Rajapaksa for alleged war crimes committed last year at the bloody end of the long-running civil war against Tamil separatists. Rajapaksa, who is in the UK, is due to meet the defence secretary, Liam Fox, tomorrow and had an address to the Oxford Union scheduled for Fridaycancelled due to security concerns.

Thousands of Tamils are thought to have died in a few days in May 2009, when a large concentration of Tamil Tiger guerrillas and civilians, crammed in a small coastal strip, came under heavy bombardment from Sri Lankan government forces.

In a cable sent on 15 January this year, the US ambassador in Colombo, Patricia Butenis, said one of the reasons there was such little progress towards a genuine Sri Lankan inquiry into the killings was that the president and the former army commander, Sarath Fonseka, were largely responsible. “There are no examples we know of a regime undertaking wholesale investigations of its own troops or senior officials for war crimes while that regime or government remained in power,” Butenis noted.

“In Sri Lanka this is further complicated by the fact that responsibility for many alleged crimes rests with the country’s senior civilian and military leadership, including President Rajapaksa and his brothers and opposition candidate General Fonseka.” Fonseka was convicted of corruption by a court martial this year.

In her cable to Washington, Butenis seeks to explain why there is so little momentum towards the formation of a “truth and reconciliation” commission, or any other form of accountability.

Most Tamil Tiger commanders, also under suspicion for war crimes such as the use of civilians as human shields, had been killed at the end of the war.

President Rajapaksa had meanwhile fought an election campaign promising to resist any international efforts to prosecute “war heroes” in the nation’s army.

Not only was the Colombo government not interested in investigating itself, but Tamils in Sri Lanka – unlike those abroad – were also nervous about the issue as it might make them targets for reprisals.

Butenis wrote: “While they wanted to keep the issue alive for possible future action, Tamil leaders with whom we spoke in Colombo, Jaffna and elsewhere said now was not time and that pushing hard on the issue would make them ‘vulnerable’.

“Accountability is clearly an issue of importance for the ultimate political and moral health of Sri Lankan society,” the ambassador concluded, but she did not think it would happen any time soon.

Last month David Cameron endorsed calls for an independent investigation into the end of the Sri Lankan civil war in 2009. The UN has set up a inquiry into the events of last May, but Butenis thinks any overt foreign push for prosecutions would be counter-productive.

“Such an approach, however, would seem to play into the super-heated campaign rhetoric of Rajapaksa and his allies that there is an international conspiracy against Sri Lanka and its ‘war heroes’,” Butenis argued.

A spokesman for Fox said: “Dr Fox will be meeting President Rajapaksa in a private capacity. This reflects Dr Fox’s long standing interest in Sri Lanka and his interest in, and commitment to peace and reconciliation there.”