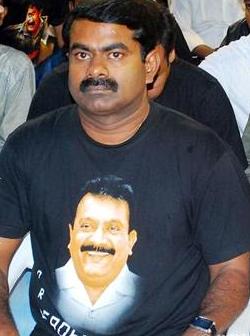 Naam Thamizhar Iyakkam (NTI) leader Seeman on Saturday asked the Centre to reveal its stand on the resolution adopted in the State Assembly demanding economic sanctions be imposed against Sri Lanka for indulging in genocide.

Addressing a public meeting in Saidapet to thank the government for adopting the resolution, he said Chief Minister J Jayalalithaa’s move had won appreciation of Tamils across the world. “The Chief Minister also took up the issue with Prime Minister Manmohan Singh during her meeting in New Delhi,” he stated.

Coming down heavily on the passenger ferry service between Thoothukudi and Colombo, he said no Tamil would travel by it. “Did any Tamil ask for such a service when the Sri Lankan Tamils are facing the worst crisis in their history?” he said.

“We should not sell or purchase goods from the island nation,” he added, reiterating a demand to shut down the Lankan embassy in Chennai. Taking a dig at DMK chief M Karunanidhi for not supporting the Tamil cause, he said the Congress was in a coma, and would die on its own.