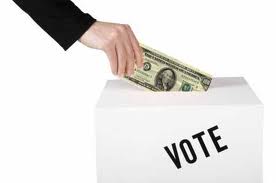 Wikileaks: Politicians Openly Give Cash To Voters During TN Polls, Says US Diplomat

Chennai, March 16 : In its continuing expose through Wikileaks documents chronicling  secret cables sent by US diplomats from India, The Hindu on Wednesday  published a US diplomat’s cable descrbiing how cash is distributed to voters during elections in Tamil Nadu and Andhra Pradesh.

The report says: “Politicians and their aides in Tamil Nadu and Andhra Pradesh admitted to violating election law to influence voters in the 2009 Lok Sabha polls through payments in the form of cash, goods, or services, according to a revealing cable sent to the State Department by Frederick J. Kaplan, Acting Principal Officer of the U.S. Consulate-General in Chennai.

“In conversations with a visiting consulate team, Karti Chidambaram of the Congress, M. Patturajan, confidant of Union Minister for Chemicals and Fertilizers M.K. Alagiri and former Mayor of Madurai, and Member of Parliament Assaduddin Owaisi of the Majlis-e-Ittenhadul Muslimeen spoke without inhibition about how they, their principals, or their parties made payments to voters during the election campaign.

“In a cable sent on May 13, 2009 (206688: confidential), accessed by The Hindu through WikiLeaks, Mr. Kaplan detailed the role and impact of money power in corrupting the electoral process, drawing from information gathered from a variety of sources in the field: “Bribes from political parties to voters, in the form of cash, goods, or services, are a regular feature of elections in South India. Poor voters expect bribes from political candidates, and candidates find various ways to satisfy voter expectations. From paying to dig a community well to slipping cash into an envelope delivered inside the morning newspaper, politicians and their operatives admitted to violating election rules to influence voters. The money to pay the bribes comes from the proceeds of fund-raising, which often crosses into political corruption. Although the precise impact of bribery on voter behavior is hard to measure, it no doubt swings at least some elections, especially the close races.”

“Wherever Mr. Kaplan and his colleagues went, “journalists, politicians, and voters spoke of the bribes as a commonly accepted fact of the election process.”

“For example, during visits to slums in Chennai and Hyderabad, they “learned that poor urban voters expect political parties to pay come election time.” They were told by a DMK political strategist that “slums are critical to a campaign because their population density and poverty allows them to be more ‘easily mobilized’ by bribes.” Representatives of a non-governmental organisation working in a Chennai slum said that “the two main political parties in Tamil Nadu – the DMK and the AIADMK – regularly bribe voters.” They described a “sophisticated operation” to distribute cash: “Weeks before the elections agents of the parties come to the neighborhood with cash carried in rice sacks. They have copies of the voter lists and they distribute the money based on who is on the list.” The agents come in the middle of the night, “between two and four in the morning, when the Election Commission is asleep.”

“In Madurai, “virtually every conversation centred on the parliamentary candidacy of Mr. M.K. Azhagiri,” who according to Mr. Kaplan had “added money” to his “political muscle” and was “using it to a degree previously unseen in Tamil Nadu.”

“His “confidant” Mr. Patturajan confirmed that cash payments were paid to voters by the DMK to secure the Assembly seat in the January 2009 by-election at Thirumangalam. “It is no secret at all, Azhagiri paid 5,000 rupees per voter in Thirumangalam,” he is quoted as saying in the cable.

“In an instructive and entertaining section titled ‘Can I get another morning paper?’ Mr. Kaplan explained the modus operandi for cash distribution adopted by the DMK in Thirumangalam: “Rather than using the traditional practice of handing cash to voters in the middle of the night, in Thirumangalam, the DMK distributed money to every person on the voting roll in envelopes inserted in their morning newspapers. In addition to the money, the envelopes contained the DMK ‘voting slip’ which instructed the recipient for whom they should vote.” This, Mr. Kaplan noted, “forced everyone to receive the bribe.” Mr. Patturajan , he wrote, “confirmed the newspaper distribution method of handing out money, but questioned its efficiency. He [Patturajan] pointed out that giving bribes every voter wasted money on committed anti-DMK voters, but conceded that it was an effective way to ensure the cash reached every potential persuadable voter”.

“S. Kannan, a mid-level Congress party official in Madurai, told consulate staff that “the 5,000 rupees per voter in Thirumangalam changed everything,” noting that previous bribes to voters had topped out at 500 rupees.

“The cable reported that Mr. Patturajan expected difficulties in replicating the Thirumangalam model for the 2009 parliamentary election because the relevant Lok Sabha constituency was seven times the size of the Assembly seat. According to the cable: “Azhagiri has been forced to ratchet the payment back down to more typical levels, but he still plans on giving it to every voter through the newspaper distribution method.”

“According to the cable, Karti Chidambaram specifically denied paying cash for votes, “but not because of any moral objection to doing so. He does not pay cash for votes in his rural constituency because it is impossible to distribute the money effectively when the villages are spread so far apart.” But “the President of the Tamil Nadu Youth Congress,” who is not named in the cable, told the Chennai Consulate-General team: “Karti is doing a good job in Sivaganga. He is distributing some money to the people, which his father won’t do.”

“Karti Chidambaram admitted he “does give ‘a few sops’ to villages that might be on the fence about supporting his father.” Most villages wanted a donation to the local temple and a community hall, he said. In his cable, Mr. Kaplan summarised Karti’s position: “bribes are useful but not necessary to political success…bribes are one factor among many, along with the quality of the candidate, the strength of the party, and the issues. But he cautioned that bribes alone will not prevail.” Anil Ambani, Karti is quoted as saying, “can’t win an election just by paying people off. It doesn’t work that way.” Candidates needed a strong party apparatus in order to win elections, but “bribes can help put you over the top” in a close race.

“Worthy requests” by constituents were worth considering, mused MIM’s Mr. Owaisi in a separate conversation with consulate staff over a late dinner in Hyderabad after a long day campaigning. According to Mr. Kaplan’s cable, Mr. Owaisi tried to make a distinction between cash bribes given by rivals and payments to voters by his own party: “One community’s leaders asked Owaisi that day to dig them a well. ‘So I sent one of my party men back later in the day,’ he explained, ‘to give them 25,000 rupees (approximately 500 USD).’ Owaisi emphasized that he does not give cash directly to voters, but rather funds worthy requests: ‘If they want a well, I give them the money, but make sure they use it for the well.’ On the same day, he also told us that he had paid 35,000 rupees (700 USD) to pay for the marriage of an orphaned girl. Owaisi contrasted his practice of funding projects for the community’s benefit with the Congress and Telugu Desam parties, which Owaisi said pay money to individual voters.”

Surprised by such candid responses, the U.S. Consulate-General officials asked Mr. Owaisi if donations like wells or marriage fees were not illegal. “Of, course,” came the reply, “but that’s the great thing about democracy”, The Hindu report said.