The UK Foreign Office has pressed Sri Lanka to investigate alleged atrocities during its civil war after “horrific” footage aired in a TV programme.

Britain’s Channel 4 showed what it said was previously unseen footage of what purported to be extrajudicial killings of Tamils by the military.

Sri Lanka’s defence ministry dismissed the videos as fabricated, saying they were intended to discredit the army.

The army defeated the Tamil Tigers in 2009, ending 25 years of war.

Both the Sri Lankan army and Tamil Tiger rebels have been accused of human rights abuses during the conflict, which killed an estimated 100,000 people. 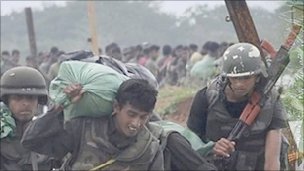 The one-hour film, entitled Sri Lanka’s Killing Fields, shows what appears to be executions of Tamil men, and video showing the corpses of naked women who appeared to have been sexually assaulted.

The programme – the result of two years’ collection of video and eyewitness accounts – said the reports amounted to evidence of war crimes committed during the final months of fighting.

One video – which was said to have been taken by the military – shows graphic images of at least three bound prisoners, including one woman, being shot at close range.

In it, a soldier gives instructions to the others about how to kill the men.

“Is there no one with the balls to kill a terrorist?” he is heard saying, before telling his colleagues to aim at the prisoners’ heads.

Channel 4, which also showed alleged abuses carried out by Tamil Tigers, said experts had found the video to have no signs of manipulation.

The film also cited witnesses describing the aftermath of the alleged shelling of hospitals in so-called designated safe zones.

British Foreign Office minister Alistair Burt said he was “shocked by the horrific scenes” in the documentary, which he said contained “convincing evidence of violations of international humanitarian and human rights law”.

Mr Burt said the UK was ready to join the rest of the international community in pursuing “all options available” to pressure the Sri Lankan government to act.

The announcement comes as the UK Home Office prepares to deport some 40 Tamils, including five who claim that their safety has been compromised after their case papers were passed to officials in Colombo. 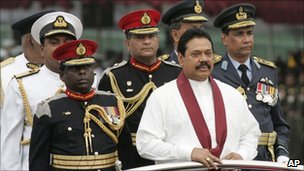 Sri Lanka, which has maintained that no civilians were killed by its army during the fighting, rejected the claims.

In a statement on its website, the country’s Defence Ministry cites an expert who says the video had been deliberately manipulated.

The government has repeatedly argued that it has been unfairly criticised for ending a conflict that claimed tens of thousands of lives amid regular suicide bombings of government targets.

Presenting the footage to the UN Human Rights Council, he said that after careful analysis, he had concluded that it was authentic.