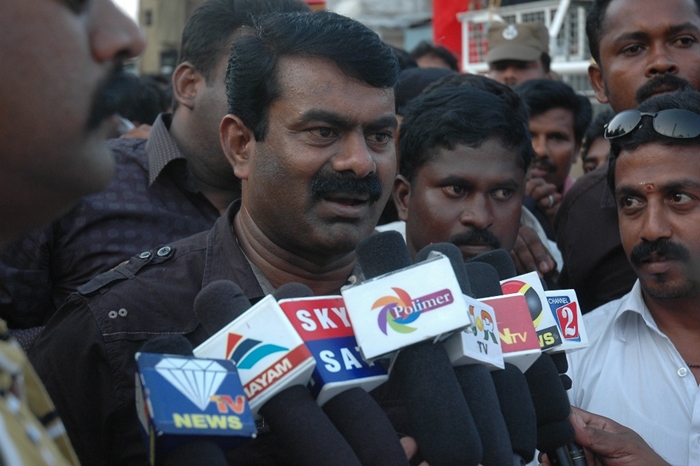 Cup campaign against Congress – The Telegraph

Pro-LTTE parties in Tamil Nadu have said they would make Sri Lankan President Mahinda Rajapaksa’s presence at the World Cup final in Mumbai an election issue because they are angry with the Congress for inviting him.

The parties blame Rajapaksa’s regime for the “genocide” of Tamils in Lanka.

“We will definitely make it an issue as his presence would only help us rekindle memories when Rajapaksa’s military exterminated a third of the Tamil race in Sri Lanka. It will add extra thrust to our campaign against Congress candidates,” said film director Seeman, who is spearheading the anti-Congress campaign through his Naam Thamizhar (We Tamils) party.

Seeman, who had earlier threatened to contest against DMK president M. Karunanidhi basing his campaign on

the plight of Lankan Tamils, later decided to protest only against Congress candidates in the state.

He has held meetings in constituencies where the Congress has put up candidates, urging the voters to take revenge on the party that has helped the “Sinhala army’s destruction of Tamil lives and homes”.

(PDK), has also protested the invitation to Rajapaksa to watch tomorrow’s final.

“We had objected to his presence at the Commonwealth Games, and this time too his presence on Indian soil would only earn the ire of Tamils here,” said PDK general secretary Viduthalai Rajendran.

Two other pro-LTTE parties who are partners in the DMK-led front — the PMK and the VCK — have been silent on Rajapaksa’s visit as they do not want to lose Congress votes in their constituencies. The Congress is part of the DMK alliance in Tamil Nadu.

But the biggies — the DMK and the AIADMK — did not seem too excited about Rajapaksa’s presence at the match.

Jayalalithaa has decided to campaign at Tirunelveli, 600km from Chennai, tomorrow.
Her campaign managers are hopeful that the rural voters will flock to her meeting at least to see her. “True, when she launched her campaign from Srirangam on the afternoon of March 24, the crowd was thin as the rally timing clashed with the India-Australia quarter-final,” a party functionary said.

On Wednesday, when the India-Pakistan match was on, she continued to campaign at Thriuvannamalai town, 200km from the capital. The local organisers had managed to rustle up a good crowd from nearby villages.

Karunanidhi, an avid cricket fan, could not watch Wednesday’s semi-final as he was addressing a meeting in Coimbatore. He was getting regular updates from his aides, though.

But on Saturday, the DMK chief will not let politics come in the way of cricket. He will watch the final with grandson Adityan.