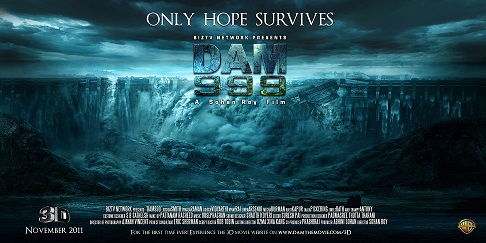 Naam Tamilar America and Naam Tamilar canada requests Warner Bros Entertainment, Inc., to not release the movie “Dam 999” in India (especially in the state of Kerala)

Sunnyvale, California (Nov 8th, 2011) – We got to know about the upcoming movie produced by your productions company titled “Dam 999”. We are deeply concerned about the after effects of this movie if this movie is released in India, especially in the state of Kerala. We have reasons to believe that this movie could be used for:

We believe that the director of this movie, Sohan Rai (who is originally from Kerala) is using this movie to purposefully advocate the state of Kerala’s aim to demolish the MullaiPeriyar dam. We believe that there is a hidden agenda behind the story of this movie. This movie secretly highlights the controversy between the state governments of Tamil Nadu and Kerala over the “MullaiPeriyar” dam in Kerala that feeds essential water to the agricultural districts of south-west Tamil Nadu. We feel that this movie is biased and does not project the truth to its entirety.

We would like to point out some key facts behind the MullaiPeriyar Dam dispute.

Historical background of the dispute

Periyar literally means big river (peri-big. Aar-river) this though name suggests is not comparable to any big rivers of India not to mention the big rivers of the world. However periyar by all means the biggest river of this small state that is Kerala. Starting from the western ghats downwards to the Arabian sea. There are a lot of hydroelectric dams across this river Idukki Sabarigiri are the notable ones in size. Mullaperiyar dam is constructed in the Kerala portion in the Tamil Nadu Kerala boarder.
Built of lime mortar hundred a and five years back still serving strong this dam is an architectural marvel .at present its height is 135’. Mullaperiayar dam is built store water and release it for the agricultural purpose of Tamil Nadu which is situated in rain shadow region and perpetually faces water shortage. Naturally Kerala which has practically no use with this dam sees this as an instrument to rob their water resource.

A lease deed was signed between the Travancore Princely State and British Presidency of Madras in 1886 which gave the British the right to divert “all the waters” of the Mullaperiyar and its catchment to British territory (the Madras Presidency, now Tamil Nadu) for 999 years. After Independence, both the entities became non-existent. Further, according to Indian Independence Act 1947, all the treaties between British Government and Indian Princely States have lapsed. Kerala argued that the agreement is not an equal one, but imposed on the local King by the mighty British Empire.

After independence, even in the absence of any treaties, Tamil Nadu continued to use the water from Periyar for extending irrigation facilities, and later for power generation on the basis of informal agreements between the governments of the two states. In 1970 the Kerala and Tamil Nadu governments signed a formal agreement to renew the 1886 treaty almost completely. The Idukki Hydroelectric project, located 30 km downstream was completed in 1976 by the Kerala government is still the major resource (about 30%) for irrigation and electricity needs of Kerala.

After Independence, the areas downstream of the Mullaperiyar become heavily inhabited, as Kerala has a very high population density.

In 1979, a state agencyhad reported that the structure would not withstand an earthquake above magnitude 6 on the Richter scale. The then Tamil Nadu government lowered the storage level to the current 136 feet (from 142.2 feet) at the request of the Kerala Government to carry out safety repairs, after which it was suggested that the storage level could be raised to the full reservoir level of 152 feet (46 m). However, Kerala government had failed to follow through on its promise. Another argument put forward by Kerala on the basis of a report on a study conducted state agencies suggested that the loss of habitat to the fauna of Periyar National Park would occur due to flooding after the increase in the storage level.

Meanwhile, the Tamil Nadu government had increased its withdrawal from the reservoir, with additional facilities to cater to the increased demand from newly irrigated areas. One article estimates that “the crop losses to Tamil Nadu, because of the reduction in the height of the dam, between 1980 and 2005 are whopping Rs. 40,000 crores. In the process the farmers of the erstwhile rain shadow areas in Tamil Nadu who had started a thrice yearly cropping pattern had to go back to the bi-annual cropping.”

The central-government also play their roles safe by appointing comities to see whether the dam is safe in its present form. The recently appointed in its report has given a clean chit to the smart dam. Controversy hardly dies down. The committee comprised of only one member from Kerala and he was overshadowed the majority members was the next issue. Similarly all the courts see an array of petitions regarding the Damocles’- sword that is the Poor dam..! Finally the Supreme Court has certified the safety of the Mullaperiyar dam. Tamil Nadu government using the opportunity is all prepared to raise the height of the dam from the present 135’ to 145’and finally to 152’.

The key issue in this regard is Kerala’s refusal to acknowledge the genuine need of the farmers in the otherwise drought-prone regions of Tamil Nadu for the waters of the Mullaperiyar;

Medias view this situation as an opportunity to the play the role of champion for the cause of the state. The Leading newspapers have started campaigns that the dam has out lived its life and waiting for it to break itself is suicidal. If Mullaperiyar collapses the gush of water would be sufficient to destroy Idukki and Sabarigiri both are no.1 and no.2 in size respectively of the dams in the state of Kerala. The holocaust in described in details of entire districts of Idukki Kottayam and Ernakulam being swallowed by flood waters. Chief ministers are forced to fly to Delhi frequently with memorandum for lessening the height of the Mullaperiyar dam to ensure safety –to play safe.

Those who sensationalize the issue practically bind the hands of their governments making it impossible to find a solution. Kerala finds it its right to let 95%of the rain water flow directly in to the sea. On the other hand, Tamil Nadu is well known for its judicial use of its water-resources. The media has to play vital role in reporting this case with utmost objectivity as dispute with two neighboring states can easily flare-up to unmanageable proportions; these two states are so interlinked that any misunderstanding can break a relationship that centuries old’ leading to bloodshed and mutiny. After all publicity and circulation come secondary to people and their livelihood.

This movie fails to acknowledge the politics behind this issue and only displays one-sided view on the problem. While lives of people of both states are depended on this Dam and the water from it, making a movie would only complicate the dispute and cause hatred between people living in both states. Hence, we feel that releasing a movie like this could have serious repercussions to already existing friction between Tamils and Malayalis (people speaking Malayalam, the predominant language in Kerala).

Hence, we request you to consider the backlashes that this movie may cause, and hence not release this movie in India, especially in the state of Kerala.